The Toy Horse Museum is located in Como, and it is the first and to date only museum in the world dedicated to the toy horse . The Museum is housed in the former stable of the famous trotter Tornese who was world champion several times in the 1950s. Discover now all our trips, tours, holidays and horse trekking in Italy. In 1969, Cavalier del Lavoro Pietro Catelli, founder of the Artsana Group, bought the building and surrounding lands and made them the headquarters of Artsana. On April 14, 2000, on the occasion of his 80th birthday, he inaugurated the Museum because he wanted to leave a unique gift to his company and to the Como area, exhibiting his collection of toy horses in the historic Tornese stable. Nowadays the museum exhibits a unique collection in the world: more than 650 toy horses were made from the eighteenth century to the present day from all over the world. Rocking or on a tricycle, stick or spring, made of wood or papier-mâché, tin or fabric, each toy horse is a unique work of ingenuity and imagination.

Since ancient times, children have played imagining to ride a steed and over the centuries the toy horse has taken different forms. The most popular toy for those who were already able to walk was the trolling horse on wheels. As an emulation of the rides of the adults, children could play to ride a stick. Only in the seventeenth century the first examples of rocking horses appeared, masterpieces of craftsmanship, reserved for the most fortunate children. In the 19th and 20th centuries, thanks to new materials and processing techniques, toy horses became simpler and cheaper and entered the bedrooms of many children. Over the years, human ingenuity and care for children have produced many types of toy horses: from the most precious rocking horses, to the most rudimentary ones, from carousel horses to wheeled ones, from stick horses to buggies. ROCKING HORSES 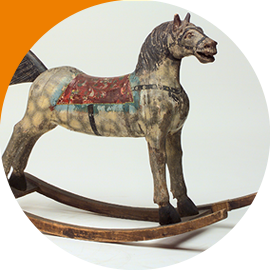 The rocking horse made its appearance only in the seventeenth century: over the years, the riding stick is adorned with a head of the horse and becomes more precious and refined, until it becomes a rocker. A horse from 1610 in the Victoria & Albert Museum in London is thought to be the first rocking horse ever built. The first examples of which we know are produced in wood, papier-mâché or metal, often covered with animal hair and richly harnessed and they are thought to the sons of nobles, since it was necessary for the aristocracy to be familiar with horses. CAROUSEL HORSES 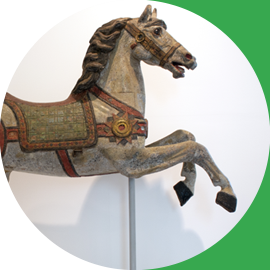 The first documented example of a carousel similar to carousels dates back to the sixteenth century. In the eighteenth century crank rides made their appearance on which some wooden horses were placed alternating with some chairs. The carousel takes its origins in Europe, but it reaches its highest levels in America. The golden age of the horse carousel lasted about twenty years: from 1905 to 1925. HORSE CHAIR 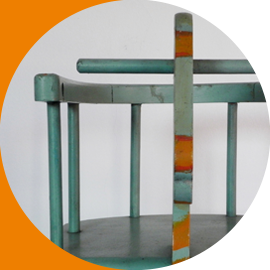 The first horse-shaped chairs made their appearance in America towards the end of the nineteenth century. After almost two centuries of the invention of the rocking chair (which already appear in Flemish paintings of the seventeenth century), chairs with the head of a horse capable of rocking are built to the delight of the children. A backrest and armrests surround the child making him feel protected and avoiding falls so that this game is also suitable for children who are not yet able to sit alone. HORSES WITH WHEELS 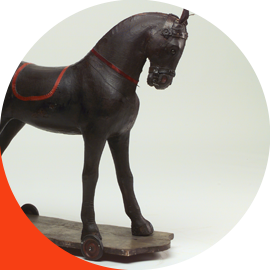 For those who could walk, the most popular toy was the trolling horse on wheels. Pulling it with a string, the pony tame follows every path. The step that took the horse with wheels from simple towing toy to a play able to support the weight of a child was short and in a short time the horses began to be built to be ridden. Many horses have a hole through the nostrils or on the wooden plank that was used to fix the bridle. TRICYCLE HORSES 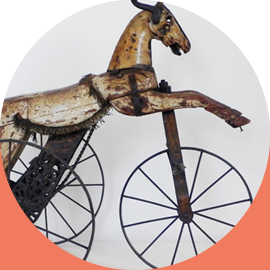 The French people, considered the inventors of the bicycle, also distinguished themselves in the field of mechanically propelled toys. In 1821 the two inventors Jean Louis Gourdoux and M. Combe first patented the horse-tricycle. The most ancient specimens, just like the first velocipedes, had large iron wheels and moved by pedaling with the hands from knobs at the height of the horse’s head. HORSES WITH SULKY 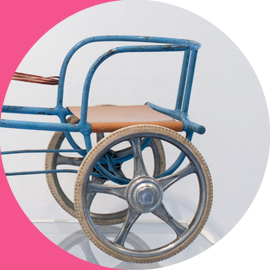 The bond that connect man and horse has its roots in ancient times and man has tamed and ridden this noble animal since then. Horse racing was the fun of men, and because adult life is often imitated by children and the facts of life turned into games, the horse with sulky (a light single-seater two-wheeled cart) has always been the most coveted toy of every child. Imitating the game of the adults was the best game. PRESSURE HORSES 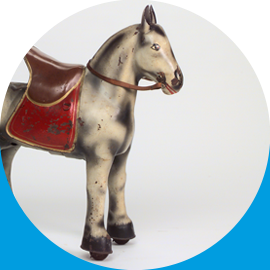 The history of the pressure horse is intertwined with the history of horses produced in lithographed tin. This type of toy had its greatest success in the late forties and sixties of the twentieth century. Thanks to a spring system and a saddle capable of transferring weight to the legs, they proceeded like real horses at a trot. The low price of the tin and the realistic movement of the horse consecrated this game and gave it enormous success. The major producers were Germany and England, where D Sebel & co manufactured the famous MOBO horse. TATÀ HORSES

Tata, animals of the rural world carved in wood and with wheels, were the traditional toys preferred by children from Valle d’Aosta. This curious name, tatà, a term borrowed from the childish expression “taa-ta”, is inspired by the sound of the moving wheels of these toys. The horse with wheels is a game that comes from ancient times: the evidence of this fun has also been found in pre-Roman Como. In the Museum there are 16 preserved tatà horses today, all obviously with the horse as the subject. 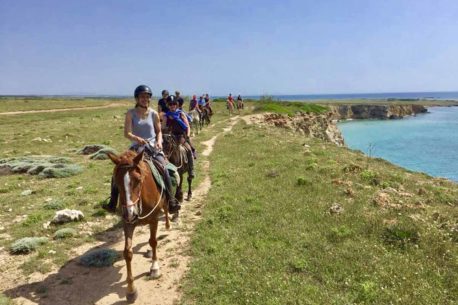 Tuscany: a taste of Tuscany